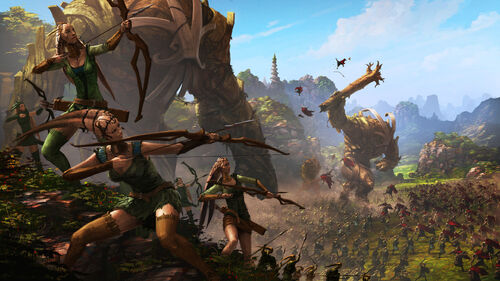 A faction of creators and builders, the Wild Walkers strive to bind rocks and trees into great living monuments. Their relationship with Dust is intense and dangerous; under its influence they can suddenly explode into berserker rages. The Wild Walkers rely on forests, to get more Industry

and build faster, but also to gain advantage in battle. Masters of their environment, they can locate enemy armies near their cities, even through the fog of war.

The Wild Walkers were simple elves living as hunter-gathers in the forests. Their gift was to shape rocks and trees into great buildings; cities rose as green towers in the deep woods. This act, called The Sharing, let an elf experience the wild, untamed energy of their totem animal.

Elves who Shared often, however risked having the spirit of the beast burst out like a violent flame and take control during moments of stress. In spite of that, some sought increasingly savage beasts in order to experience Sharings of greater intensity.

With individuals embracing the savagery of the animals and vanishing forever into the woods, the nation had to choose between the wild spirits of nature and the civilization of their towers. Troubled but determined, they forswore the Sharing, renamed themselves the Wild Walkers, and set out to build their towers away from their dark past.

Only time will tell if the Sharing still has its hold on their souls.

This icon indicates the presence of an army on a tile.

The Sharing is a faction trait unique to the Wild Walkers that gives them the ability to detect the presence of armies without being able to see them. There are, however, a few rules that determine how this ability works. First, the army being detected must be on a tile of the map that has been revealed, but is not in the visible range of any friendly buildings or units. Second, the army being detected must be within a region that the Wild Walkers control, or a region directly adjacent to one they control. This also applies to oceanic regions, so it is possible to detect armies in an oceanic region if the Wild Walkers control a land region bordering it, or vice versa.

Additionally, while The Sharing allows the Wild Walkers to detect the presence of enemies that are controlled by other empires or roaming armies, it only indicates that an army is present; it does not provide any information about the army's faction, composition, status, or anything else. It is also worth noting that invisible armies cannot be detected by The Sharing; armies are made invisible by either having every unit in the army have the Stealth capacity - as is common with the Forgotten - or by having at least one unit in the army with the Ghost Force capacity, which can be achieved by equipping a hero leading the army with the Nwere accessory.

All Wild Walker heroes are able to wield Longbows, Magewands, Crossbows, and Shields as weapons.

The forest has long been your home, but its wild spirits threaten to drown you. You believe that your future lies elsewhere, in great living towers you can build to reach the heavens. But not all share this vision...