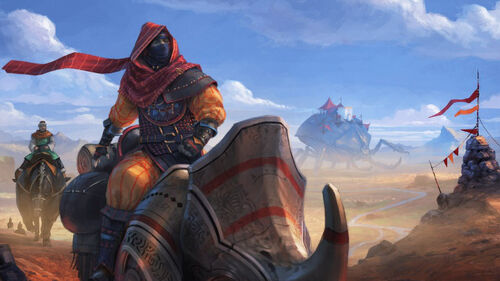 Traders, explorers, and adventurers, the Roving Clans are nomadic and mercantile. Traversing Auriga on their great beasts of burden, the Clans bring commerce and hard-headed negotiation to the far corners of the world. The Roving Clans can relocate their cities at will. They tax every market transaction and can ban other empires' use of the marketplace. However, as wise merchants, they will also never decide to go to war.

Plying roads and sea lanes with skill and courage, they are ever on the lookout for new resources, new products, new markets, and new customers. Wherever the Clans pass, markets spring up, commerce blossoms, and the strange and wondrous goods from the many strange and wondrous peoples of Auriga are traded. The Roving Clans are so entwined in the business dealings of Auriga, that a tiny piece of every transaction somehow makes it into their coffers.

While their preference is for peace and trade, the Roving Clans should not be underestimated in war. With rapid, mounted units giving them an advantage in speed, they make difficult targets and frustrating enemies. Even their great cities can move, perched on the backs of giant Setseke scarabs -- an exploit unmatched by another nation.

Patient, clever, and wily, the Roving Clans bring sophistication -- and manipulation -- to the peoples of Auriga.

Roving Clans cities are able to take the Setseke Ho! action, which takes 1

turn to do, similar to the Salting the Earth action. Upon taking this action, the city and all its districts will be converted to a Setseke unit. This unit functions similarly to a settler in that it can place a city on a designated tile, even one in a different region than where the original city was. After doing so, any districts that were picked up can be rebuilt using the Happy Decampers construction, which requires no industry and only 1 turn to build, but can only be used once per turn, making large cities take some time to resettle. Additionally, special districts such as the Altar of Auriga will also be picked up and need to be redeployed, but will appear as themselves in the available constructions list, and also require no industry to build.

It should be noted though that non-district expansions, such as resource extractors and watchtowers will not be picked up by the Setseke Ho! action, and will instead remain in place. So long as you do not have a city built in the region where these kinds of expansions are, you will not benefit from them, and it is possible for a rival faction to settle in that region and take over the already-built expansions.

During a Dust Eclipse, the Roving Clans gain two main benefits. First, their cities provide a health regen area - similar to that provided by Watchtowers - that grants 20% health regen to friendly units adjacent to their cities. Additionally, the Setseke unit created from Roving Clans cities gains a massive boost to its base attributes: +430 Life

All Roving Clans heroes are able to wield Longbows, Crossbows, and Shields as weapons.

Is Dust the goal of life, or merely the best way to keep score? Whichever it is, you are ceaseless in your efforts to understand and acquire it. What better way than to dig into the secrets of the past, and those who first mastered it? The task will be difficult, requiring effort and sacrifice. But then, if it was easy, it would hardly be fun...