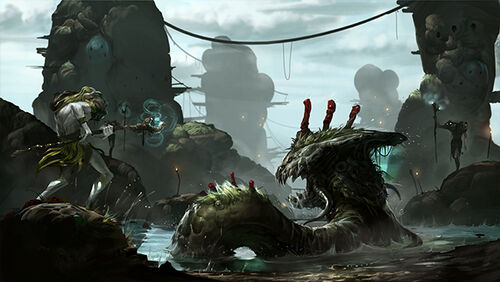 Constructed creatures that broke out of their prisons deep beneath the oceans, the Morgawr are driven to seek the surface by forces they do not understand. Once the planet is theirs, however, their ambition may not be sated...

The Morgawr are intimately linked to water, getting huge Science

bonuses for exploiting sea tiles. They can also freely embark and move faster on rivers. They use psychic abilities to control minor factions and manipulate major ones.

While much is known of the surface of Auriga, its oceans still guard many mysteries. While the nations of the planet learned to meet, trade, and war on the seas, another force arose from beneath them.

They are - or is? - the Morgawr, a twisted and possessed people that seem to be symbiotic creations of sea life and other, unimaginable species.

Constructed creatures that broke out of their prisons in the abysses of Auriga, the Morgawr are driven to seek the surface by forces they do not understand.

Only trusting the waters, the Morgawr can disembark and embark everywhere and their troop transports are faster and stronger than anyone else.

Masters of mind control and suggestion, they can control roaming Minor Faction armies for their own nefarious purposes.

Once the planet is theirs, however, their ambition may not be sated...

This trait eliminates the movement cost of embarking and disembarking, making it possible to embark and disembark multiple times a turn. It also provides the faction with an improved version of the Transport Ship which has higher base attributes across the board.

For a small Influence cost, the Morgawr can take control of any normal roaming army they can see on the map, including Fomorians. Units controlled this way function similarly to Privateers; they have an increased

upkeep cost, cannot complete quests, search ruins, or talk to villages or fortresses, and appear as normal roaming armies to all other empires. However, control of these armies can be relinquished at any time for no cost.

With this ability, it is possible to turn villages that have been destroyed or pacified back into unpacified villages by spending some Influence

. The amount of influence required to do this requires on a few factors, including the Minor Faction, the condition of the village, if it's in a region occupied by another empire, the number of cities you control, and your technological era. Here is a rough method to approximate the cost of Seeds of Dissent:

The cheapest cost is for a destroyed village in neutral territory during Era I when you only have 1 city, which will be about 30

, varying slightly depending on the minor faction. A village that is in neutral territory but has been pacified - either by bribe or a quest - will cost roughly twice as much. For every additional city founded or technological era reached, the cost for both of these will increase by about 10

. If the village is in a territory occupied by another empire, then all of the values listed before are approximately doubled.

Morgawr awoke in a lab without a sense of past. An entity that is a single mind of many bodies, Morgawr has a powerful compulsion to dominate and control the minds of others in order to achieve their ultimate intent. But there are many questions that it would like to answer. Who are I? Where do I come from? What are all these strange, one-minded beings who get in our way? Why are I driven to do what I do, and how will I know that I have succeeded?