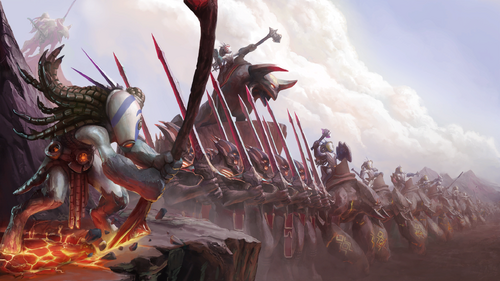 Survivors of the decimation of their own world, the Kapaku have slumbered for centuries as they crossed the stars. Emerging onto Auriga's horrifyingly vibrant and green lands, they have a single aim - to recreate their old world of ash and lava. The Kapaku can only get their Food from volcanic terrain. Yet, they can also rely on their Volcanoformer machines to change any terrain into a volcanic one.

Rescued from the brink of extinction after the invasion of their home world, the Kapaku were evacuated by the Concrete Endless and sent to Auriga. They were promised a new beginning on a new planet, but discovering the true intentions of their saviors will pit them against both Auriga’s current denizens and the dark remnants of the Dust Wars.

The Kapaku are tinkers and inventors, a race of craftsmen with powerful bonds to earthen energies. Small in size, their resourcefulness and skill led them to create powerful stone golems to use as labors and soldiers.

The Kapaku are a new race uniquely suited to the Volcanic Terrain, able to thrive off it where other races would struggle, and their symbiotic relationships with their golems allows them to exploit more resources more efficiently, fueling their machinery to turn Auriga into a new Volcanic Paradise.

This trait gives the Kapaku a strong preference towards Volcanic tiles, whereas Volcanic terrain is usually detrimental to other factions. All Kapaku units and heroes have the Inner Fire capacity which grants a 20% bonus to Damage when in battle on Volcanic tiles, and prevents them from taking damage from Lava Flows. Additionally, Kapaku units are able to regenerate health on Volcanic terrain, whereas other factions' units are not. However, this all comes at the cost of the Kapaku being unable to produce Food on non-Volcanic tiles. While this can be an issue when it comes to expanding into non-volcanic terrain, the Kapaku's other trait Volcanoformation helps with this.

This trait gives the Kapaku the ability to predict upcoming Dust Eclipses accurately in the same way that the Allayi are able to predict the start of Winter. Additionally, the locations of the confluxes that appear on the map are revealed within regions controlled by the Kapaku, and their neighboring regions. Those confluxes also provide a greater bonus to Kapaku armies than to everyone else. The effects of the confluxes for the Kapaku are listed here:

This trait gives the Kapaku the ability to create and deploy Volcanoforming Devices on the map, which will turn the tile its placed on and the six surrounding it into Volcanic terrain after a number of turns - 5 on normal speed. Volcanoformation devices are created by spending an amount of any one strategic resource, starting at 2 and increasing by 2 every time that resource is used; i.e. if Titanium is used 3 times to create a Volcanoformation device, the cost to purchase the next one will be 8

, but the cost to create one with Glassteel will still be 2

. Once a Volcanoformation device has been created, any Kapaku army anywhere on the map can deploy it on an unoccupied tile, after which the Volcanoformation process will start. It should be noted that these devices can be destroyed before their task is complete, so it is best to guard the device while it is working to prevent that.

All Kapaku heroes are able to wield Longspears, Hammers, Battle Hammers, and Shields as weapons.

Haukea Wai is received as a reward for completing Chapter 4 of the Kapaku faction quest. Haukea is received at Level 4, so her base attributes reflect this, but do not include bonuses from capacities or equipment.

Custodian Tua appears leading an army in Chapter 6 of the Kapaku faction quest, and cannot be obtained by normal means in-game. Tua and the army she is leading must be defeated to complete the quest. Tua appears at Level 3 with a full set of Tier 1 Iron Armor, and is wielding Tua's Hammer. Because Tua only appears as an enemy and therefore cannot have her equipment changed, her listed attributes and capacities include the bonuses gained from her equipment and level.

After the destruction of their homeworld by the machines - terraforming robots of the Virtual Endless - the Concrete endless brought the Kapaku, to Auriga, promising them a world that they could transform into another fiery Eden. When the Kapaku discover Auriga is not the empty world their saviors led them to believe, Custodian Aktyl begins to wonder what secrets this new world holds...