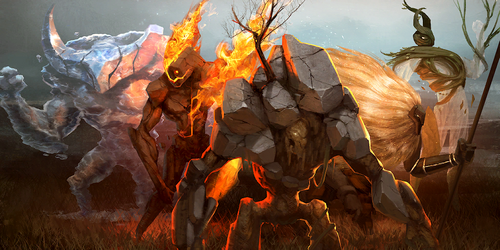 Guardians are colossal solitary units that can be recruited through research and subsequent construction. Some of the guardians can also be unlocked via Global Quests.

The five different guardians all have unique Army Actions that they are able to perform, as well has having unique powerful capacities. Constructing a Guardian is similar to constructing a district in that you "build" the guardian on an available tile adjacent to your city; as such, anyone who can see your city can see that you are constructing a guardian, construction on it can be halted by a siege, and as long as you are building the guardian, districts cannot be placed on that tile.

There are older and greater things in the universe than the Endless, whose few hundred centuries barely scrape the surface of history. What of those older entities, those other forces? Did they disappear before the arrival of the Endless, or could the Endless, at the height of their power, have contained and controlled them? And now that the Endless have faded or moved on, might some of these elder beings suddenly rise up again…?