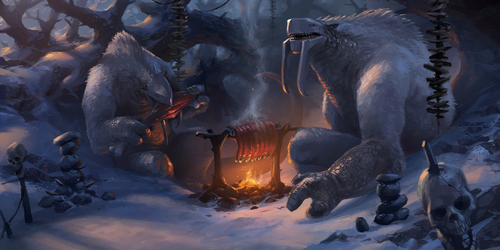 The Geldirus are a Minor Faction. This minor faction is only available to those who have purchased the Founders Pack or Emperor pack.

The origins of this species are found in a pack of wolves that were driven into inhospitably high tundra after losing a series of fights with the Drakken. Infected by Dust, their new form has rendered them indifferent to the coldest environments and seasons. Geldirus villages are simple things, befitting a simple people. Often carved from slabs of snow or fitted rocks plugged with mud, their towns are more for storage and social connections than warmth and defense.

per pacified and rebuilt Geldirus village on units.