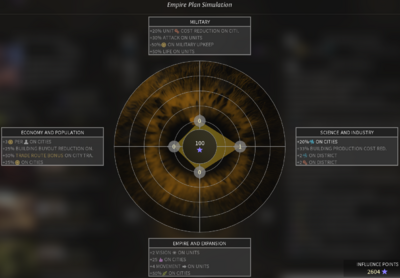 The Empire Plan is the interface which allows you to set major strategic medium-term directions for your empire. The plan is divided into four categories that correspond to the four categories of research disks; Military, Science and Industry, Empire and Expansion, and Economy and Population. Each category has a number of ranks of increasing effect or power. By sliding the apexes of each category you set the investment level in terms of

Influence. The total amount of

Influence spent in all categories cannot exceed your current stock. As you unlock new research Eras, additional Empire Plan ranks become available, allowing you to design more powerful plans (that are of course more expensive in

Influence). You can choose to balance your investment between the four categories or raise a chosen category to the maximum in order to drive your empire in one direction. Empire Plans are set every 20 turns on Normal speed, and will stay in place for the duration.

Influence cost of each tier is a formula based on the number of cities in that faction, and the Game Speed.

Note that for empires with the "Conversion" trait - such as the

Cultists - every converted Minor Faction village counts at 20% of a city.

Mykara - every Fungal Bloom counts as 4% of a city.

Due to their faction traits, some major factions are unable to make use of some parts of the Empire Plan available to other factions, and so those effects have been replaced with faction-appropriate ones.

Broken Lords: Due to their "Appetite for Dust" trait, the Broken Lords are unable to use

. As such, Tier 4 of the Empire and Expansion branch has been changed to "+50% Population Buyout Reduction on Cities" for the Broken Lords.

Forgotten: Due to their "Science Phobic" trait, the Forgotten are unable to use