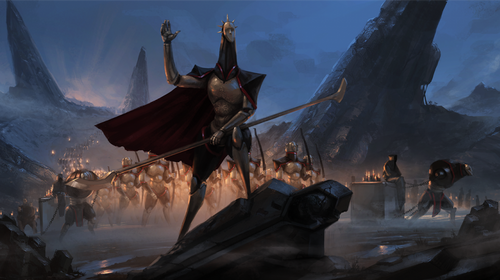 The Cultists of the Eternal End are led by The Queen and the Unspoken and will go to all ends to ensure that its will is carried out through the conversion of lesser groups. Limited to a single city, the Cultists instantly destroy any city they defeat. To sustain their economy, their armies must convert pacified minor faction villages by spending Influence

This mysterious cult is led by two creations that are the remnants of the Endless: The Queen, imprisoned within her indestructible throne in the capital city, and the Unspoken, a wandering - and perhaps insane - being of enormous power.

Left alone on the planet for millennia, they have turned against their creators and sworn to destroy every trace of their existence.

The Cult maintains a single city where the Queen is entombed in her indestructible throne. Its power, therefore, is projected across Auriga through proselytization and conversion, when the faithful followers and heroes of the Cult convince other, lesser peoples to join their cause.

The Cultists then recruit, train, and arm these converts from the tribes and vagrants that live scattered across the surface of Auriga. Regardless of where they are or to whom they have previously sworn allegiance, when a tribe turns to the Cult it does so until its death.

Monolithic, fanatic, and ever-expanding, the Cult of the Eternal End will spare no effort, cost, or sacrifice to see that its will is done.

High Seat of the Queen[edit]

As a result of this trait, the Cultists are not able to produce settlers, and therefore cannot have more than one city at any time; they also cannot capture additional cities due to the Weapons of the Enemy trait. However, this is balanced somewhat by the fact that the city the Cultists do posses is able to have districts that upgrade to a max of level 3, achieved by surrounding the district with four districts of level 2 or 3. This can be especially useful with special districts that provide a large bonus for being a higher level, such as the Legendary Buildings.

Additionally, because the Cultists can only have one city, they do not experience any expansion disapproval, and are therefore unable to research any technology that would reduce it, such as Bread and Circuses.

Another trait unique to the Cultists among the base game major factions that needs further explanation is the Conversion mechanic. This trait gives Cultist units the ability to convert Minor Faction villages that are pacified, destroyed, or haven't been converted by another empire yet. Upon converting a village, the following things happen:

if the village is in a region no other empire has claimed, and was pacified either by bribery or completing a pacification quest. There are also different base values if the village is pacified but in a region claimed by another empire, or if the village has been destroyed, and these values are approximately 1.5x and 2x greater than the initial base cost respectively, but not exactly. Here is the table listing the base Influence cost to convert each minor faction village based on the situation it is in.

Cost=A*(N+1), where A is the base cost determined from the table above, and N is the number of villages already converted on empire.

All Cultist heroes are able to wield Claws, Swords, and Shields as weapons.

You bring these lesser beings up to a state of wisdom and power that they can barely comprehend; such is the nature of your purpose. Seen through the eyes of one of these lesser followers, however, the path is anything but straight, and their grim determination is richly rewarded. When they survive, of course.